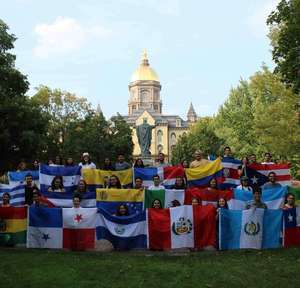 Hispanic Heritage Month starts today at the Notre Dame and all over the nation.  Over 14% of incoming undergraduates self-identify as Latino/Hispanic students, making over 1000 of the 8731 undergraduates at ND Latinx, not including international and DACA students. The first record of a Latinx student at ND dates back to Alexandro Perea of New Mexico who enrolled in 1864.  More Latinx students from New Mexico and Colorado enrolled by the 1870s, due in large part to Fr. Zahm who recruited students from the Southwest to ND. In 1928, La Raza Club was formed by Latin American and Mexican students, later reporting its first U.S. born president in 1954: Samuel Adelo of New Mexico. Sociologist Dr. Julian Samora established the Mexican-American Graduate Studies Program at ND in 1971 to 1985, becoming known as a consistent advocate for Latinx students, mentor to dozens of graduate students, and the founder of Latino Studies nationwide.

Latino representation in the student body has grown significantly, just as it has nationwide.  Latinos at ND vary widely in their economic and geographic origin; they identify as both American and Latino, which is common to be both.  Despite the Latino population being widely talked about in political rhetoric as recent immigrants or invaders of the U.S., four in-five Latinos are US citizens according to the Pew Research Center.  The U.S. Latino population numbers 61 million people, of which 80% are US citizens, and is the nation’s second fastest growing racial or ethnic group after Asian Americans.

The observation of Hispanic Heritage Month began in 1968 as Hispanic Heritage Week under President Lyndon Johnson and was expanded by President Ronald Reagan in 1988 to cover a 30-day period starting on September 15 and ending on October 15. The day of September 15 is significant because it marks the beginning of several anniversaries of independence for Latin American countries.

The Institute for Latino Studies, founded in 1999 at Notre Dame, kicks off Hispanic Heritage Month with a virtual table talk on “Latinx Voters in the 2020 Election,” with ILS Director and Donald P. McNeill Endowed Professor of Transformative Leadership Luis Fraga and Associate Professor of Political Science Ricardo Ramirez. A record 32 million Latinos are projected to be eligible to vote in 2020, up from 27.3 million in 2016. The 2020 election will mark the first time that Latinos/Hispanics will be the largest racial and ethnic minority group in the electorate, accounting for just over 13% of eligible voters.

This year, ILS highlights its faculty fellows who teach and research Latino Studies topics, as well as, notable alumni and authors:

In partnership with ILS, the employee resource group AdelanteND made up of Latinx Faculty & Staff will conduct a book club during Hispanic Heritage Month, reading Subduction by New York Times Columnist Kristen Millares Young.  Also, the Hispanic Alumni of Notre Dame (HAND), which ND established its advisory board in 1994, will host a panel of alumni discussing their personal and career choices since their college years at ND.  Many are pioneers and leaders in their career paths and aim to share their experiences with the ND community on October 15, bringing Hispanic Heritage Month to a close.

ILS Director Luis Fraga states, “ILS continues to foster a deeper understanding of Latino communities to empower faculty, students, society -- all of us -- to make better strategic decisions as to what kind of a country we want to leave for our children and grandchildren.”  Today, ILS serves 30 faculty fellows, 62 undergraduate supplementary majors/minors, and over 600 students who enroll in its cross-listed courses each year.  ILS also provides a merit scholarship to 18 undergraduates in the Latino Studies Scholars Program and 21 summer service learning internships, open to all ND undergrads, in the Cross Cultural Leadership Program. Become involved in the work of the institute by contacting ILS at latino@nd.edu.